I have decided to make notes on our life from now on as [I] realise how much I have already forgotten about this war and in years to come I shall probably regret it immensely, so just a few dates to get the previous months together.

When at Biggin for manoeuvres in August, Sir Kingsley Wood visited us and wish[ed] us the “best of luck”, this was the first time I really seriously thought of war as being very near.

24th Aug. 39., the post brings my calling-up papers, so a rush to Tecalemits to tell them I am off, home to arrange for Lily & the boys to go to Harrow & stay with Mary, and I am off to Hendon, in uniform for who knows how long.

Hendon, life in a newly built wooden hut, sharing a small room with Goody, sleeping on a straw mattress on the floor, and long days at Dispersal, the west side of the drome, quite 1½ miles from the hangers, is all I really remember of those days; then came the move to Biggin, all in a rush and the most motley collection of transport imaginable, two L.P.T.B. buses and some twenty commandeered lorries of every description, not to mention the many private cars, motor cycles and one auto-cycle, nevertheless we all arrived safely, to my amazement.  We find we are still in the old camp occupying the same hanger as in the previous September crisis.  I share a room with Goody and tubby Wilson, really a lovely room with a glorious view looking towards Tatesfield, Tug Wilson runs the flight from the admin side whilst I am I/C at Dispersal.  My main memories of these early days are listening to H.M. The King speaking on the wireless, on the aerodrome from the radio of the C.O.’s car, it made a deep impression at the time.  The first night alarm, how we all rushed to the aircraft in pitch darkness, how “jittery” everyone was, and all because some strange aircraft had been reported over Holland! 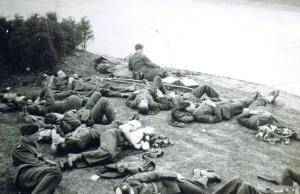 In those glorious summer days, we had a really enjoyable time and the crews used to take it in turns to sleep under the wings of our Blenheims when on duty at night, such was their enthusiasm, and many is the night I wandered round in the early hours to see that everything was in order and cover the men over with aircraft covers.  My office at this time was a disused lorry of 1914 vintage!; but those lovely days were not to last and as autumn came, so the rain, and in a few week[s] the Dispersal point was a morass of mud.  Life was brightened by many things, chiefly the madness of the officers who all suddenly acquired powerful motorcycles and used to race about the aerodrome, with many spills, exactly why none were seriously injured was a miracle.

The war dragged on and nothing happened, Jerry was busy in Poland & nothing came towards these Islands.

By November the mud had become impossible at our dispersal and the the main east to west runway was complete, so we moved the aircraft to this at the eastern end, the officers and air gunners using an old bungalow to live in when on duty, whilst the erks erected two bell-tents inside the old greenhouse, just think, at war, living in a place full of glass.  It was about this time we moved from the barren quarters of “south camp”, into the “army camp”, a very dismal and depressing place indeed, so absolutely filthy with dirt and dust.  Here I shared a bunk with ??Janny?? and with the help of ACH. Boyle, we soon made the place at least habitable, the room had one real comfort, a lovely fireplace which gave out a terrific heat. Here we had a good mile walk to the mess for meals, an infernal waste of time.  Here also ??Janny?? “won” the bosun’s whistle from Robbie & Ginge and annoyed us each morning with his efforts at “piping” the Admiral aboard” at Reveille.  I well remember the guard waking me in the early hours one morning with the news of a terrific gale, so I turned out and with some of the lads, went down to the aircraft in Shoalers decrepit car, and was it blowing, it was near impossible to walk against it, and one Blenheim had come adrift and blown across the runway and come to rest on the other side between two others, without doing any damage.

Lily & the boys were now living in our own place at Sussex Road and I was able to make regular trips home every two weeks, for a couple of days, Stiles taking me as far as Ealing in his Austin.

Some two weeks before Christmas the sqdn had to provide a detached flight at Gravesend and here I spent one of the strangest Xmas I shall every spend I suppose, Red and I were living in the old Customs Room, quite a easy place really, but it entailed fetching our meals from a mobile kitchen some 50 yds away, through the snow, our joy was an electric fire for making toast.  The equipment, especially for night flying were very advanced here and boundary lights, landing lights etc were controlled from the watch tower, a vast improvement upon RAF equipment.  Times which stick in my memory about this place are the wizard Xmas dinner the cook produced under appalling conditions from the travelling kitchen; a Blenheim which Robinson landed on one wheel and which we raised in two hours with two-four ton hydraulic jacks and heaps of contractors timber; the night out in Gravesend with Singer & Red, travelling on the fire tender, a real good supper, the dance, Singer & Body (Body & Soul), the first aid station and it’s ridiculous splendour, and the trip back on ice covered roads on the fire-tender; the antics of Bushell & Peacock in the snow, and letting off the signal rockets, how on earth they got away with such things amazes me.   The Blenheim Demit ran onto soft ground in the snow & which took six hours to get out, every time one pumped the jack, the jack went down instead of the aircraft going up, anyway we managed in the end with the help of much man power, two tractors and lots of timber.  The night six Blenheims came from Biggin at mid-night and Lee-Steere undershot and demolished the wind-sock with a crack like a rifle shot and amazingly little damage.